From prison to palace, treasure vault to the private zoo, the magnificent Tower of London has fulfilled many different roles down the centuries. One of Britain’s most iconic structures, this spectacular World Heritage Site offers hours of fascination for visitors curious about the country’s rich history – after all, so much of it happened here. Inside the massive White Tower, built in 1078 by William the Conqueror, is the 17th-century Line of Kings with its remarkable displays of royal armaments and armor. Other highlights include the famous Crown Jewels exhibition, the Beefeaters, the Royal Mint, and gruesome exhibits about the executions that took place on the grounds. The adjacent Tower Bridge, its two huge towers rising 200 feet above the River Thames, is one of London’s best-known landmarks.

Although the present building dates from the 12th century, Christ Church in Aldate’s Street, acquired cathedral status in 1546. The most striking feature in the interior is the double arcading of the nave, creating an impression of much greater height. In the south transept is the Thomas Becket window (1320) and five glass windows designed by Edward Burne-Jones and made by William Morris in 1871.  The grave of philosopher George Berkeley (1681-1735), who gave his name to the town of Berkeley in California, is also located at the cathedral.

Also in Broad Street, Built in 1664, the Sheldonian Theatre was Sir Christopher Wren’s second major building and is used for the university’s annual Commemoration. The Museum of the History of Science – housed in the Old Ashmolean Building, theworld’s first purpose-built museum building – is a fascinating facility that specializes in the study of the history of science and the development of western culture and collecting. The museum includes the blackboard that Albert Einstein used during his Oxford lectures of 1931.

Radcliffe Square in Broad Street is home to the Old Schools Quadrangle (1613) and the Radcliffe Camera (1737), a rotunda that originally housed the Radcliffe Library in Oxford University. The 16-sided room on the ground floor is now a reading room for the Bodleian Library, the university library, and the country’s first public library, founded in 1598. A copy of every book published in Britain is deposited here, including some two million volumes and 40,000 manuscripts. From the library, you can also explore the magnificent Divinity School.

With the evidence of teaching in 1096, University of Oxford is indeed the main attraction and reason for this city’s fame. It is the second oldest university in the world and has the first academic rank according to The World University Ranking.

Pedestrian-friendly Cornmarket Street, commonly known as the “Corn,” is Oxford’s busiest shopping street. Along with its many big-brand shops and department stores, the street is also home to the historic Golden Cross arcade, popular for its craft and jewelry shops, and the Covered Market, dating from 1774 and housing an eclectic mix of food retailers. Also of interest is the former Crew Inn, where Shakespeare is said to have stayed on his journey between Stratford and London, and St. Michael’s Church, notable for its early Norman tower.

Nicknamed The Bird and Baby, is a historic pub in St. Giles Street, Oxford a small, narrow building, the pub reputedly served as the lodgings of the Chancellor of the Exchequer during the English Civil War (1642–49) when Oxford was the Royalist capital. The landmark served as a playhouse for the Royalist army, and pony auctions were held in the rear courtyard. These claims are inconsistent with the earliest date usually given for construction of the pub. When in Oxford, why not visit ‘The Eagle and Child’ pub and discover its unique history with some of the greatest writers in English history. In this pub, at around the year 1939 to 1962, J.R.R. Tolkien and C.S. Lewis regularly met.

In Woodstock, just eight miles northwest of Oxford, is Blenheim Palace, the seat of the dukes of Marlborough and the Spencer-Churchill familyand birthplace of Winston Churchill. This magnificent 200-roomed palace was built between 1701 and 1724 for John Churchill, first Duke of Marlborough, with the financial support of Queen Anne, who wished to express her thanks to the Duke for his victory in 1704 over the French at the Battle of Blenheim, an event commemorated on the ceiling of the Great Hall. Another highlight is the chance to explore the magnificent gardens, with their French Rococo borders, and the Capability Brown designed parklands. Other outdoor attractions include Italian gardens and herb gardens, a butterfly house, and a maze. 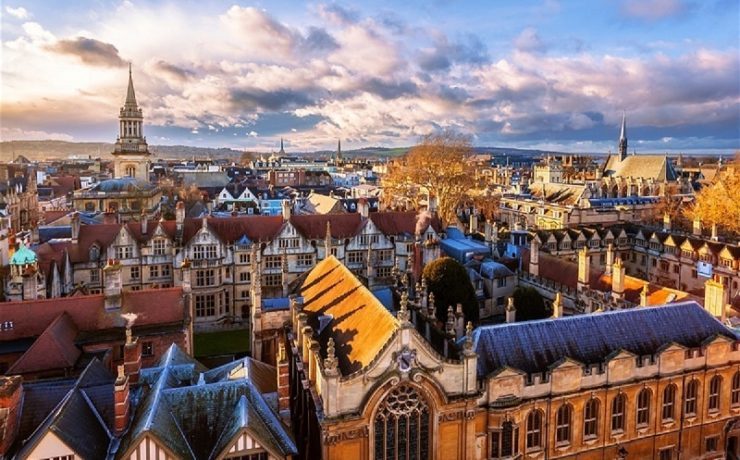